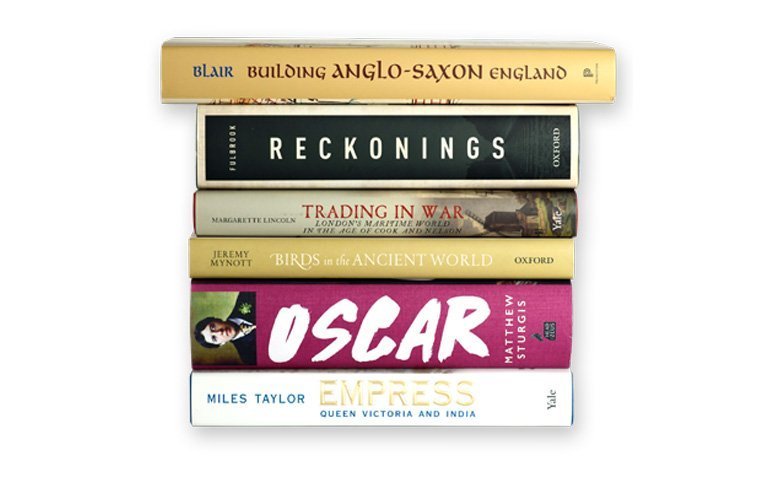 The shortlist for the Wolfson History Prize 2019 is revealed today, celebrating the best new historical non-fiction books in the UK.

From a major new biography of Oscar Wilde, to an entirely fresh take on Queen Victoria as Empress of India, and from a history of the human impact of the Holocaust, to an exploration of the role of birds in the Ancient World, the books shortlisted for the most prestigious history prize, and most valuable non-fiction prize in the UK, each combine excellence in historical research with readability.

The Wolfson History Prize 2019 shortlist is:

Chair of the judges and President of the British Academy, David Cannadine, commented: “The great strength and depth of history writing in the UK is demonstrated by this year’s shortlist. It brings together a range of authors, writing very different types of history across many periods and from divergent perspectives. The unifying element is a commitment to share their meticulous research and passion for their subject with as wide an audience as possible. The task of the judges – although difficult – was a delightful one, and it is with great enthusiasm that we announce the shortlist for 2019.”

Paul Ramsbottom, chief executive at the Wolfson Foundation, which awards the Prize, said: “The Wolfson Foundation awards the Wolfson History Prize to make a public statement about the importance of history writing to society. The Prize celebrates wonderful books – books that break new ground in understanding the past and which are written in an engaging and accessible style, attributes which each of this year’s shortlisted works skilfully demonstrate.”

‘Oscar: A Life’ by Matthew Sturgis – one of only two works by a non-academic historian to be shortlisted – is the first major biography of Oscar Wilde in thirty years. Offering a wealth of new material to create a rich and moving portrait of Wilde and the era in which he lived, Oscar: A Life demonstrates why Wilde is as relevant today as ever and presents him as an inspiration to all those who seek to challenge convention.

‘Empress: Queen Victoria and India’ by Miles Taylor is an entirely original account of Queen Victoria’s relationship with India, highlighting not only her cultural, political and diplomatic influence on India, but also how passionately involved with the country she was throughout her reign.

Two of the shortlisted works examine the impact of war, persecution and conflict on an individual, human level, bringing untold and forgotten histories to the fore. ‘Reckonings: Legacies of Nazi Persecution and the Quest for Justice’ by Mary Fulbrook explores the lives of both the victims and the perpetrators of the Holocaust, illuminating the stories of those who have previously remained outside the media spotlight, while exposing official myths about dealing with the past, and the extent to which the vast majority of Nazi perpetrators evaded justice. ‘Trading in War: London’s Maritime World in the Age of Cook and Nelson’ by Margarette Lincoln is a vivid account of the forgotten citizens of maritime London who sustained Britain during the Revolutionary Wars, harnessing little-known archival and archaeological sources to highlight the pervasive impact of war.

Offering fresh perspectives on ancient history and exploring humankind’s relationship with nature, ‘Birds in the Ancient World: Winged Words’ by ornithologist and non-academic historian Jeremy Mynott, uses representations of birds in Ancient Greece and Rome as a prism through which to explore the similarities and differences between ancient conceptions of nature and our own. Meanwhile, ‘Building Anglo-Saxon England’ by John Blair is a radical rethinking of the Anglo-Saxon world that presents the latest archaeological discoveries to reappraise the origins of towns, villages and castles, highlighting how the natural landscape was modified for human activity.

On ‘Building Anglo-Saxon England’ by John Blair: “A guide to a world now almost utterly lost and wholly unrecognisable. Drawing on decades of research and richly illustrated, Blair’s book provides us with a panoramic view and a startling new interpretation of the Anglo-Saxon world.”

On ‘Reckonings: Legacies of Nazi Persecution and the Quest for Justice’ by Mary Fulbrook: “Quoting many moving accounts from victims of the extreme cruelty perpetrated by the Nazis, Fulbrook moves through the generations to trace the legacy of Nazi persecution in postwar Germany. A masterly work which explores the shifting boundaries and structures of memory.”

On ‘Trading in War: London’s Maritime World in the Age of Cook and Nelson’ by Margarette Lincoln: “Covering crime and punishment, shipbuilding and repair, smuggling and much more, this lively account recovers the forgotten people of maritime London, the commercial centre which sustained a global empire.”

On ‘Birds in the Ancient World: Winged Words’ by Jeremy Mynott: “Charming, quirky, and lavishly detailed, this beautifully illustrated book helps us to understand ancient cultures from the unfamiliar angle of the ornithologist.”

On ‘Oscar: A Life’ by Matthew Sturgis: “An authoritative and tremendously readable biography of Oscar Wilde by an author who brings to life a man whose anarchic genius never fades. A superb, original and balanced study.”

On ‘Empress: Queen Victoria and India’ by Miles Taylor: “It is hard to write something new and original about Queen Victoria, but Miles Taylor succeeds triumphantly. An engaging and impeccably researched account that throws fresh light onto the British Raj. Victoria will never seem the same after this.”

The winner of the Wolfson History Prize 2019 will be named at a ceremony at Claridge’s Hotel, London, on Tuesday 11 June. The winner will be awarded £40,000, with each shortlisted author receiving £4,000.

The Wolfson History Prize is run and awarded by the Wolfson Foundation, an independent charity that awards grants in the fields of science, health, education, arts & humanities.

The Wolfson History Prize 2019 Shortlist will be showcased at a live recording of BBC Radio 3 Free Thinking, hosted at the British Academy in London, on Tuesday 7 May. Chaired by Professor Rana Mitter FBA, the 2019 shortlisted authors will debate history writing and offer an insight into each of their books. Tickets can be purchased from The British Academy.